24 hours after allowing five goals to a desperate Dallas Stars team, the Tampa Bay Lightning got bad news prior to puck drop in Sunrise. Victor Hedman, Ryan McDonagh and Jan Rutta would miss Saturday night’s game against the Florida Panthers. They then went out and played undisciplined hockey in a 5-1 loss to their in-state rivals.

In the first few minutes of the game, Tampa Bay fired a few shots but Sergei Bobrovsky had the answers. The Panthers then got their legs moving after a long layoff (their last game action was Monday) and had a bunch of quality chances.

Alexander Wennberg drew first blood a little over midway through the opening frame, giving the Cats a 1-0 lead.

Not long after, Ryan Lomberg was sent to the penalty box for hooking, giving Tampa Bay the game’s first power play. They got a couple of grade-A opportunities but Bobrovsky was there to keep the puck out of the net.

Former San Jose Shark Fredrik Claesson then didn’t help his case by taking a hooking penalty in his first game action with the Bolts. His new teammates bailed him out though, killing off the Panthers first attempt with the man advantage.

Heading into the second period, the Lightning needed to play smart and start shooting the puck more. They didn’t begin well in one area, with Erik Cernak sent to the box for tripping early. While the penalty kill started strong, they couldn’t finish the job. Sam Bennett took a perfect pass from Aleksander Barkov and beat Vasilevskiy late in the opportunity to make it 2-0.

That looked to wake the Bolts up. Yanni Gourde threaded a pass from behind the net to Luke Schenn in the slot. The defenseman then fired a wrister past Bobrovsky to cut the Cats lead in half, 2-1.

Another flurry followed, with Brayden Point and Ondrej Palat both coming close to tying the score. Bobrovsky stood tall, however, keeping Florida in front.

Ryan Lomberg then challenged Schenn to drop the gloves. Not one to back down, Schenn obliged and the two exchanged punches. Schenn looked to get the better of that scrap, as Lomberg was given an extra two minutes for instigating and a misconduct to go with the standard five minutes for fighting. That gave Tampa Bay another power play. They couldn’t do anything, however, making it an easy kill for the Panthers.

Palat then shoved Noel Acciari into the boards for a cross checking penalty. Acciari was down briefly, so the trainers went out to check on him. He got up gingerly, though. Gourde then found himself with a nice chance shorthanded but Bobrovsky made the save.

Shortly after Palat exited the box, Wennberg’s shot from beside the net popped into the air and was deflected in by Cernak. This restored Florida’s two goal lead at 3-1.

Things got worse from there. Jonathan Huberdeau’s shot snuck through Vasilevskiy’s legs to make it 4-1. It was Huberdeau’s 20th goal of the season.

A couple of minutes later, Frank Vatrano had a high-sticking penalty. That gave the Lightning an opportunity to pull within two goals, but they couldn’t get enough chances to make that happen. As a result, their power play continued to struggle.

Once the horn sounded to end 40 minutes, all hell started to break loose. Bennett and Mikhail Sergachev were going after one another in the corner, while Brandon Montour had Gourde’s jersey over his head and was throwing punches behind Vasilevskiy’s net. Montour, Gourde and Bennett were all given roughing penalties, so the Bolts began the third on a power play. 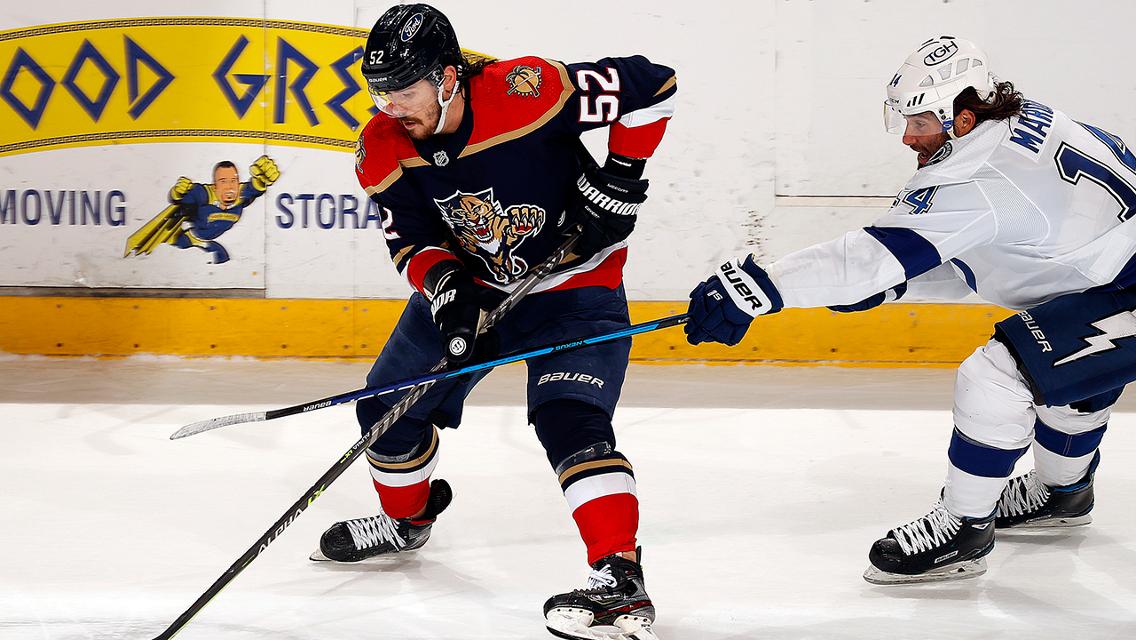 Entering the final period (barring some miracle), the Lightning needed to play their game. Fast and disciplined, with shots from everywhere. That didn’t come close to happening, though.

After another wasted power play, Tampa Bay ended up on the penalty kill again.  Midway through the man advantage, Blake Coleman and Vatrano received minors for slashing. That made it a 4-on-3 for the Cats. They got shots on net, but the Bolts penalty kill came through.

Halfway through the period, Owen Tippett laid a big hit on Anthony Cirelli behind Vasilevskiy’s net. That got the attention of the guys in the road white jerseys who didn’t hesitate to stick up for their teammate. Rookie Ross Colton jumped on top of Tippett, sparking a melee. Nearby, Radko Gudas went after Cirelli. Colton, Claesson and Bennett were all assessed misconducts, ending their nights prematurely. Colton was also given two minutes for roughing, a penalty served by Tyler Johnson that gave Florida a power play. Luckily, damage was not done.

Wennberg polished off a hat trick, with the puck deflecting three times before beating Vasilevskiy to make it 5-1 Panthers.

All hell broke loose from there. Montour and Pat Maroon went after one another along the boards. It started out minor, as Montour slashed Maroon and Maroon had a few words for him. Then, as the officials were leading them both away, Maroon got tired of hearing Montour’s chirping and went charging after the Panthers defenseman. He threw him down and started throwing a couple of punches. That landed him a misconduct and roughing penalty to go along with Montour’s penalties. Both Gourde and Lomberg were given misconducts as well, ending their night.

Then, with less than three minutes remaining, Barclay Goodrow got into it with Huberdeau. He had no interest in dropping the gloves though so Goodrow ended up fighting Acciari. Goodrow ended up taking a cross checking penalty and was assessed a misconduct and five for fighting. Huberdeau and Schenn were also given misconducts, while Acciari got five minutes for fighting.

Bobrovsky on Saturday’s win over Tampa Bay: “I love it… That’s the game of hockey. That’s the best of it. We had a good crowd behind us. It was a great atmosphere. We’re going to see those guys a lot.”

Huberdeau on the nature of Saturday’s win: “It was physical, but we don’t mind that. It was an intense game.”

The Lightning look to get healthy and right the ship in their regular season finale on Monday night in Sunrise. Puck drop will be at 7:00 PM EST.