After earning three of four points in their weekend series against Detroit, the Tampa Bay Lightning headed home looking to keep the good vibes rolling. They did that, using quick strikes to beat the Dallas Stars 6-2 on Wednesday night.

Coming off a rare two-day break between games, the Lightning came out flying. Less than three minutes in they broke the ice, with Tyler Johnson snapping a 22 game goal-less streak by beating Stars goaltender Jake Oettinger to make it 1-0.

From there, Dallas tried to get their offense going. It didn’t last long, as they were assessed a bench minor for too many men on the ice. The Bolts had good puck movement and nearly scored, but ultimately failed to extend their one goal lead.

The Stars started to come alive then. An extended flurry featured prime scoring chances for Jamie Oleksiak and Radek Faksa that were either blocked or covered by Lightning netminder Andrei Vasilevskiy. Tyler Seguin then found himself alone in a prime scoring area but partially fanned on the shot, making the save routine for Vasilevskiy.

A collision at center ice between Mikhail Sergachev and Jason Robertson led to Sergachev being sent off for elbowing. That gave Dallas their first power play of the game. They got a few good looks early, including a John Klingberg shot that clanked off the post, but couldn’t find the back of the net.

Not long after that, the Stars found themselves shorthanded. Blake Comeau ended up in the penalty box for holding the stick, giving the Lightning their second power play of the period. This one didn’t fare well at all, with the Bolts failing to get any extended zone time or shots on net.

With momentum on their side following an impressive kill, Dallas struck with about 26 seconds remaining in the first. Joe Pavelski found Seguin, who beat Vasilevskiy to tie the game at one apiece. 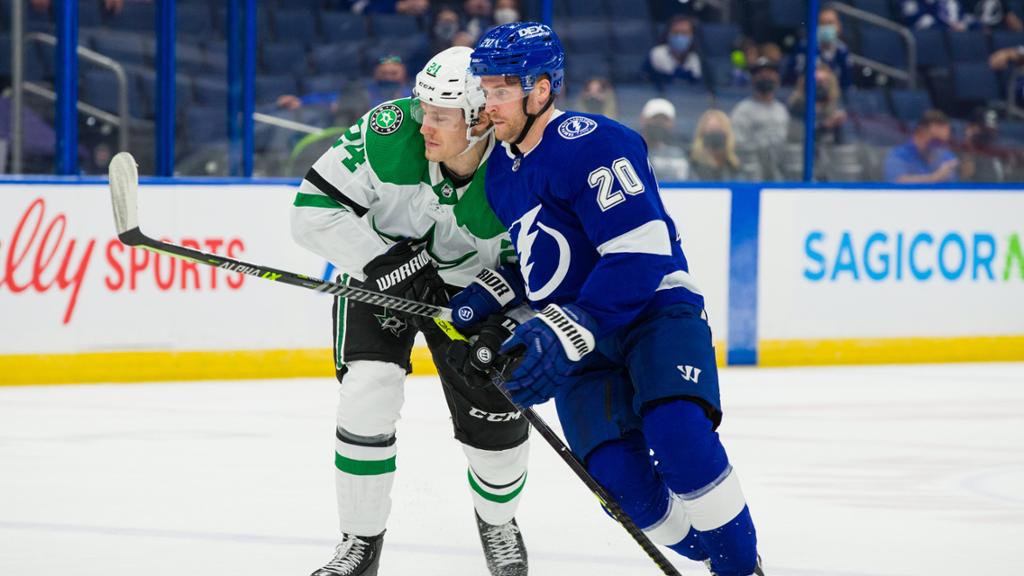 On even footing after one period of play, the Stars came out with more jump. They started the second with a huge flurry that featured lots of extended zone time in the Lightning end. Vasilevskiy came up big, getting his glove on a bullet by the rookie phenom Robertson.

As the period went on, Tampa Bay looked to regain their momentum from early in the game. Ondrej Palat sent a pass cross-ice to Brayden Point stationed at the side of the net. Before Point could shoot the puck, however, a Dallas player got their stick in the way to thwart the opportunity.

In desperation mode, the Stars attempt at clearing the puck out of harms way went awry. As a result, Denis Gurianov found himself in the penalty box for a delay of game. That sent the Bolts to their third power play. While better than the second chance, they still couldn’t seem to score.

Pressing to get the go-ahead goal, Dallas ended up taking another penalty right after Gurianov’s expired. Jamie Benn inadvertently high sticked Yanni Gourde while battling for puck possession, giving the Lightning their fourth shot with the man advantage. Unsurprisingly, they cashed in, with Gourde threading a perfect pass over to Alex Killorn who tipped the puck past Oettinger to make it 2-1.

Finally feeling it after their first successful power play in awhile, Tampa Bay took full control and advantage of the time remaining in the second period. Oettinger came up with a huge save on Palat, but the Bolts weren’t done. Point showed off his silky smooth moves by dancing past Oettinger before firing the puck into the open side of the net. That made it 3-1. 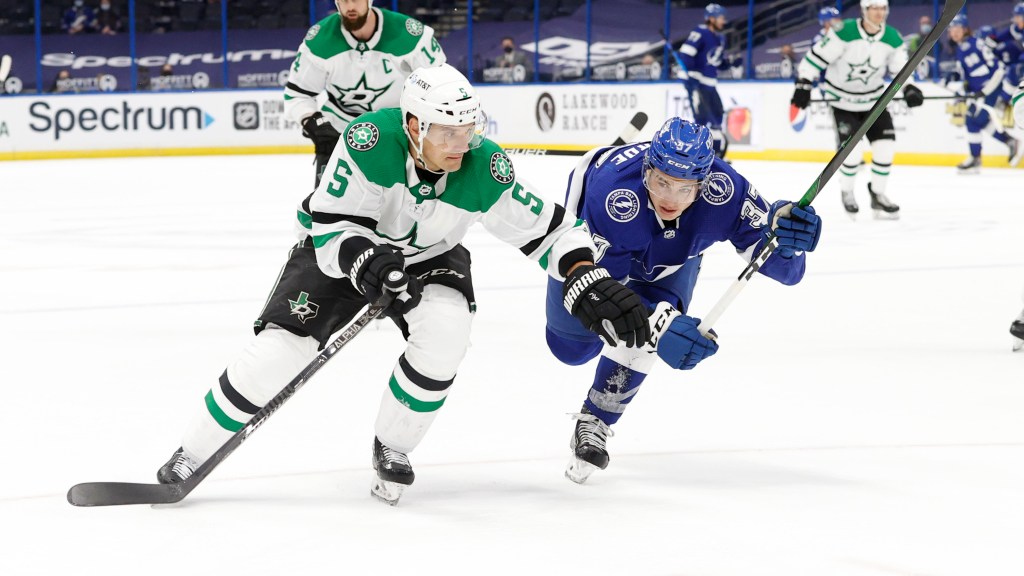 Entering the final period of regulation, the Lightning knew they needed to play solid defense and take advantage of whatever opportunities they were given. Things didn’t start out great, as Sergachev was sent to the box for high sticking. That gave the Stars their second crack with the man advantage. After a slow start, they got a few grade-A chances but were unable to get any shots to go in.

After multiple opportunities were blocked or saved, Andrej Sekera’s long range shot deflected off Point and past Vasilevskiy to pull Dallas within one, at 3-2. That didn’t last long though, as Erik Cernak’s shot from downtown beat Oettinger to make it 4-2.

With about three minutes remaining in regulation, the Stars pulled Oettinger for an extra skater. The Lightning pounced, with Ross Colton scoring an empty net goal to make it 5-2.

Out of pure desperation, the Stars pulled Oettinger again after the center ice faceoff. Johnson stripped the puck from Dallas and was tripped twice heading down the ice. From his knees, he found Sergachev and passed the puck to him for an easy goal into the open net. That made it 6-2 Bolts. 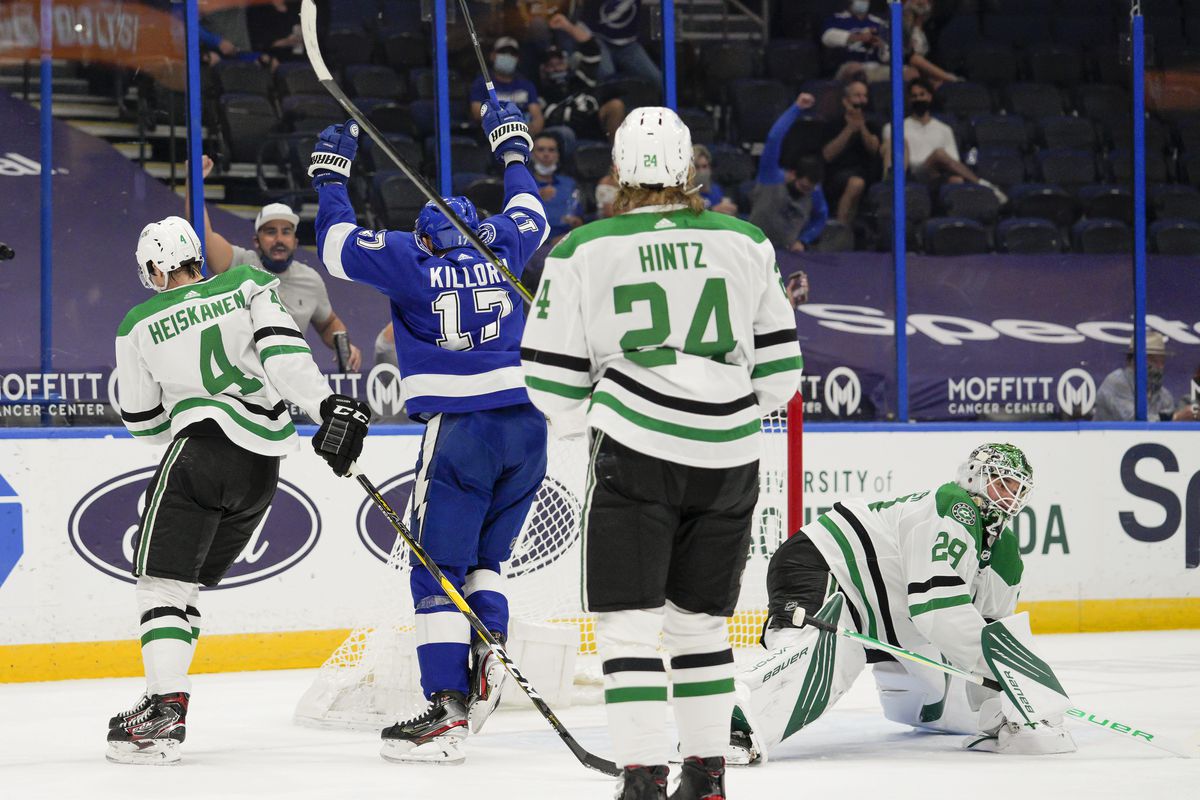 The Lightning look to keep the momentum going as they host these same Stars in the home regular season finale on Friday night. Puck drop is scheduled for 7:00 PM EST.