A few nights after their goaltender stood tall in a shutout win, the Tampa Bay Lightning found themselves on the wrong end of things. Thomas Greiss stood tall, pushing the Detroit Red Wings to a 1-0 shootout victory on Saturday afternoon. However, the Bolts did earn one point to stay within two points of the Florida Panthers for second place in the Central Division.

Coming off of a win streak that featured an offensive outburst, the Lightning came into Detroit riding high. They held the Red Wings to four shots on goal the entire first period. Two of those came in the final minute of the period.

Early on, Alex Biega was penalized for hooking. That gave Tampa Bay the game’s first power play. They had multiple good looks, but couldn’t solve Greiss. Brayden Point then got a chance in tight as the opportunity expired. Greiss was up to that challenge as well, making a sprawling save on the Bolts speedy center.

Later in the opening period, Ryan McDonagh was sent to the box for cross checking. The Red Wings got their first crack with the man advantage. It didn’t go as planned, with the Bolts getting the best scoring chance. Yanni Gourde and David Savard had a 2-on-1 shorthanded, but Savard’s shot was stopped by Greiss.

For the first time in a couple of games, the Lightning found themselves deadlocked after 20 minutes. The middle frame was supposed to be their chance. Detroit had other plans though, not allowing them to get into a groove offensively. It started with multiple icing calls on the Red Wings, forcing Tampa Bay into a slow, choppy game instead of the speed game they’re used to.

After Greiss made the save on a laser shot by Victor Hedman, the Wings got their first real flurry around Bolts goaltender Curtis McElhinney. Mikhail Sergachev came across to thwart the chance, sending it off to the side of the net where McElhinney alertly covered the puck.

Not long after that, Hedman was called for holding, giving Detroit another shot with the man advantage. Again, the Lightning had the best opportunity. Alex Killorn and Anthony Cirelli found themselves with a 2-on-1 shorthanded. Unfortunately, Cirelli’s shot hit the post and stayed out.

With the period coming close to ending and frustration likely setting in, rookie Ross Colton shoved Vladislav Namestnikov into the boards. Both guys were sent to the penalty box, leading to a little 4-on-4 action. Point and Ondrej Palat got a great chance in tight, but Palat whiffed on the shot attempt with Greiss down and out. 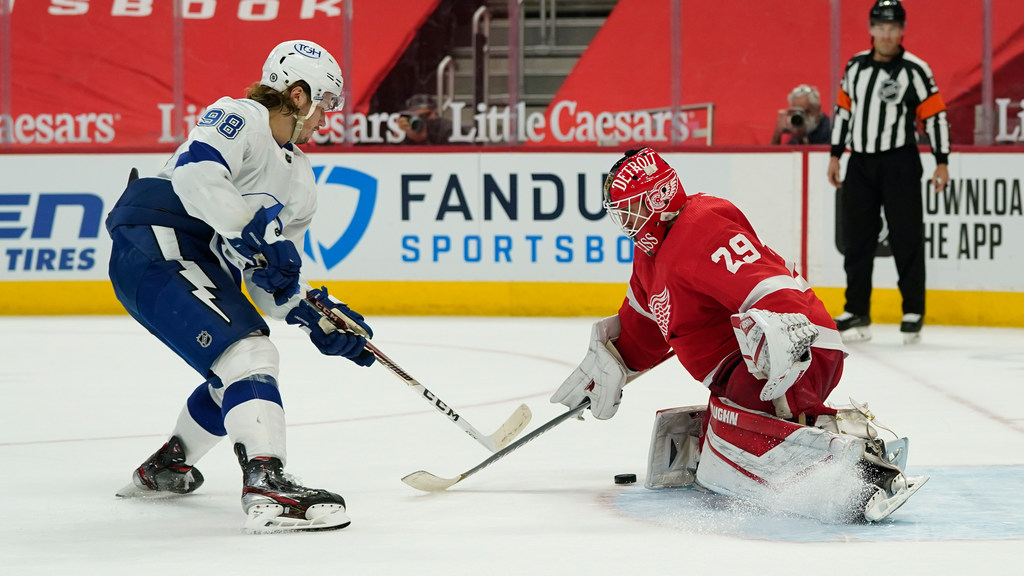 Entering the final period of regulation, the Lightning had to balance playing smart with creating offense. Point started things off right, driving to the net and making a move to get Greiss out of position. Marc Staal got his stick on the puck to break up the shot attempt though, saving what would have been a sure goal.

Not long afterwards, Evgeni Svechnikov was penalized for hooking. That gave Tampa Bay a chance to break the scoreless tie. It didn’t work out, as the Red Wings penalty kill stood strong.

Ryan McDonagh then fired a shot from downtown that looked to have solved Greiss. However, a successful challenge of goaltender interference by Detroit wiped the goal off the board and kept this game scoreless.

Soon after the goal was waved off, Joe Veleno was sent to the box for boarding Savard. That gave the Bolts their second power play of the period. Sam Gagner then tripped Hedman early in the opportunity, setting up a lengthy 5-on-3. The Lightning got a few good looks, but Greiss and the penalty killers were up to the challenge.

Blake Coleman was then penalized late in the period, giving the Red Wings one final shot with the man advantage. They were able to get set up and create scoring chances, but the Bolts penalty killers got the job done.

With one point in hand, the two teams battled to see who would get the second point. Detroit controlled things off the faceoff and got a few good chances on McElhinney. He made the save. Late in the overtime period, Killorn found himself in alone on Greiss. The Red Wings goaltender turned his shot aside, essentially ending the 3-on-3 overtime period.

The first four shooters scored in the shootout. The next four shooters either missed the net or were stopped. Tyler Johnson and Valtteri Filppula both scored in Round 7 before Sam Gagner beat McElhinney in the 8th round to seal the Red Wings 1-0 win.

Thomas Greiss made 33 saves on 33 shots to post his second straight shutout.

Curtis McElhinney was perfect too, saving 15 shots in regulation and overtime before falling short in the shootout. 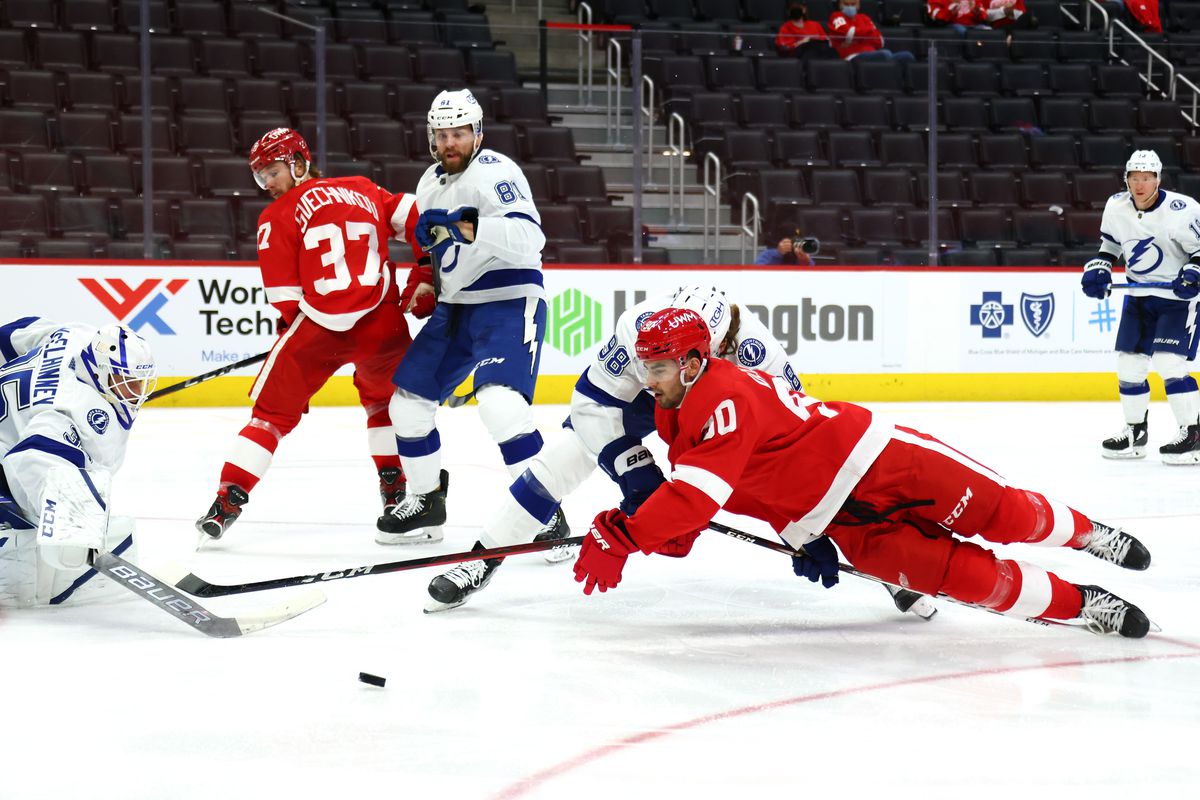 After a tough-to-swallow shootout loss, the Lightning will get right back at it on Sunday afternoon in Detroit. Puck drop is scheduled for 3:00 PM EST.