Coming off a late rally to beat the Columbus Blue Jackets on Thursday night, the Tampa Bay Lightning were ready to go from the start. Their domination of the opening period paved the way in a narrow 2-1 win over the Detroit Red Wings.

Out of the gate, the Lightning were flying. Their speed and intensity level had the Red Wings back on their heels. That paid off early, as the fourth line of Pat Maroon, Mathieu Joseph and rookie Ross Colton went to work in the offensive zone. Joseph battled along the walls before passing to defenseman Andreas Borgman. The young defenseman shot the puck on net, creating a rebound. Colton was quick to pounce on that, firing the puck in the open side of the net to make it 1-0.

That goal created more momentum, with the Red Wings struggling to keep up. The Lightning took advantage once again, as Ondrej Palat found Victor Hedman at the point. The veteran blueliner made a nifty pass to Brayden Point, who elevated the puck over Thomas Greiss for a 2-0 lead.

As Detroit struggled to relieve pressure, the Lightning kept pressing. Mikhail Sergachev’s bomb from the point hit Steven Stamkos in the back of his leg, causing him to momentarily go down. It was a scare thankfully, as the captain skated the pain off. He was immediately back on the ice, as the Red Wings were called for too many men on the ice. That gave Tampa Bay the game’s first power-play.

Early in the opportunity, the Red Wings got a shorthanded chance. Andrei Vasilevskiy made the save, one of a few in the opening frame. The Lightning took control from there, peppering Greiss. Detroit’s netminder and penalty kill got the job done, preventing Tampa Bay from furthering the damage.

Late in the period, Givani Smith drew a hooking call from Ryan McDonagh. That gave the Red Wings their first crack with the man advantage. The Lightning penalty kill was sharp though, getting more shorthanded opportunities. Greiss made a few big saves to keep his team in the game, but they struggled to find offense.

With six seconds remaining in the first period, Darren Helm was sent to the box for tripping Point behind Vasilevskiy’s net. That sent the Lightning to their second power-play. They got one shot off before the horn sounded to end a period that was primarily tilted in their favor.

Entering the middle frame, the Lightning had 1:54 of power-play time. They got a few chances, but couldn’t find the back of the net.

Shortly afterwards, Alex Killorn found himself with a glorious chance. He barely missed, giving the Red Wings some life.

It took time, but Detroit finally found their legs in the second half of the middle frame. They got back-to-back shifts of extended zone time, leaving the Lightning scrambling a little. Vasilevskiy stood tall, thwarting any shots that came his way.

The Red Wings couldn’t build on their momentum, as Adam Erne was penalized for an illegal check to the head of rookie defenseman Cal Foote. That gave the Lightning another power-play, their third of the afternoon. While they got chances, the Bolts were unable to break through again. Yanni Gourde then evened things out with six seconds remaining in the opportunity. Detroit then got 1:54 of power-play time, but failed to do anything. 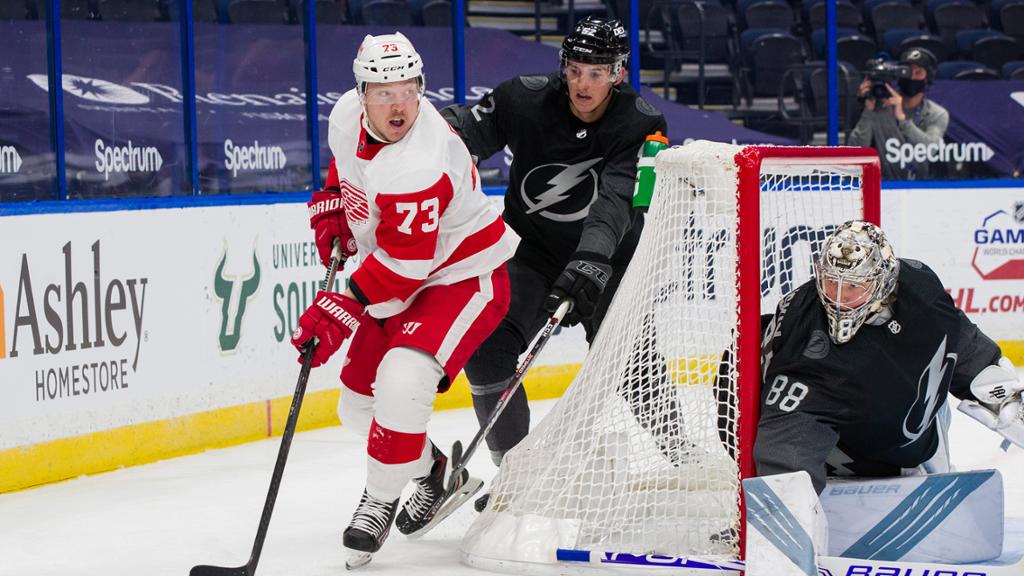 Holding a two goal lead heading into the third, the Lightning had to focus on clamping down defensively. They struggled a little early, allowing the Red Wings to pull within one.

Erne grabbed his own rebound and shoveled the puck over a sprawling Vasilevskiy four minutes into the third. That made it 2-1, and the Lightning found themselves staring at another tight finish. They responded, with the Blake Coleman, Barclay Goodrow and Gourde line getting lots of great chances. Those opportunities didn’t result in a goal, but set up a sprint to the finish line.

Detroit responded with a push of their own, as Vasilevskiy just got a toe on Valtteri Filppula’s shot to deflect it wide. Not long after, Troy Stecher and Erne found themselves with a 2-on-1. They couldn’t convert though. Anthony Mantha then split the defense and found himself in alone on the Lightning netminder. Foote recovered in time to disrupt the shot. The Red Wings got one last gasp, but Vasilevskiy made sure everything stayed out of the net. 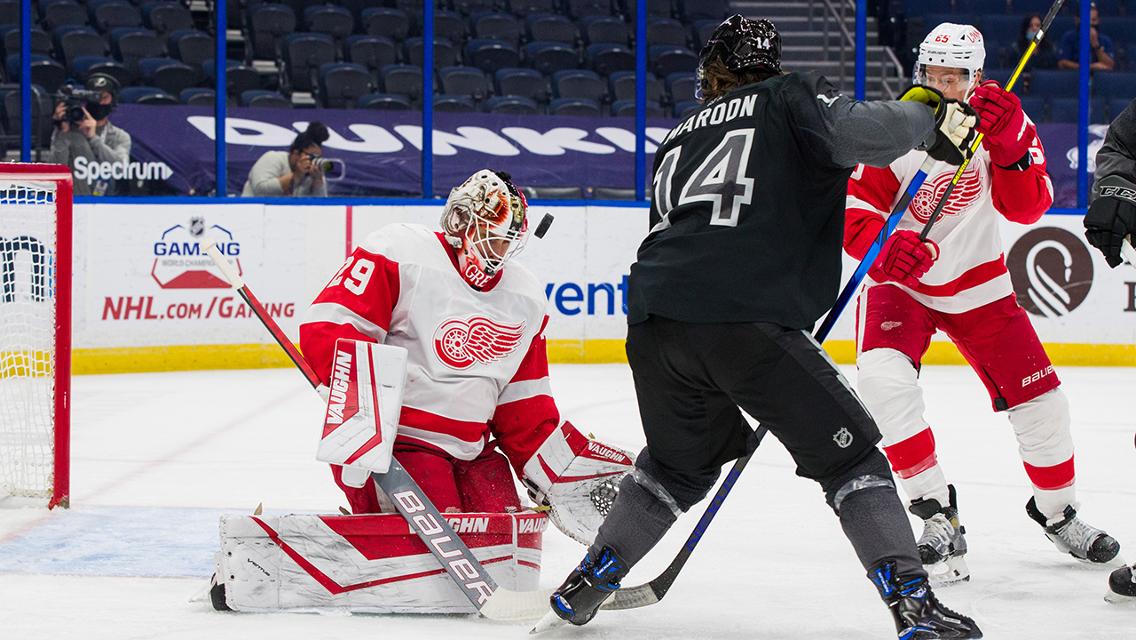 “When we’re able to get a 2-0 lead, we should be able to shut that down, and for the most part we did,” Lightning coach Jon Cooper said. “We were pressing for a third (goal) and couldn’t get it, and it was opening us up a little bit. I thought, especially in 6-on-5, we did a pretty good job, and Vasy held it down.”

Victor Hedman: “Guys did a good job of blocking shots, and Vasy made some big-time saves for us obviously as usual. It was a hard game, and it always feels a little bit special playing Detroit, it feels like, and they’re playing really good hockey as of late, so we knew it was going to be a battle.”

The Lightning look to keep their winning ways going when they host these same Red Wings on Sunday afternoon (12:00 PM EST).