Fresh off a disappointing 3-2 overtime loss in Game 3, the Tampa Bay Lightning looked to bounce back on Saturday afternoon. It wasn’t easy, as the Carolina Hurricanes had answers for every Bolts score. After 30 minutes, Tampa Bay found themselves in unfamiliar territory, trailing by two goals. That didn’t faze them, as they scored three straight to end the second period and four overall to notch a 6-4 win.

With both teams motivated, this game started off with a bang. Off the opening faceoff, Blake Coleman and Warren Foegele were both assessed unsportsmanlike conduct penalties so the teams began play 4-on-4. The Lightning got a great chance by Victor Hedman but Petr Mrazek made a big save.

Shortly after the matching minors expired, Nikita Kucherov was blatantly high sticked by Brady Skjei but the officials failed to call a penalty. That infuriated coach Jon Cooper and most of the nearly 14,000 fans at Amalie Arena, but the referees failed to make things right.

It didn’t matter though, as the Lightning took that failure to make a call personally and played 20 minutes of solid hockey. They won most of the puck battles, keeping the Hurricanes off balance for prolonged periods. Mrazek kept Carolina in it, with an amazing save on Brayden Point and then Pat Maroon off a breakaway.

A little over midway through the period, a hooking penalty sent Jordan Staal to the box. The Lightning power play had a few good looks but failed to score.

Less than a minute after the failed opportunity, the Bolts drew first blood. Erik Cernak made a heads-up play to hold the puck in the zone. He then passed the puck up to Ondrej Palat who found Point for an easy tap-in to make it 1-0. With the goal, Point became the seventh Lightning player to record 60 career playoff points. Among active players, only four required fewer contests than Point to reach the 60-point mark in the postseason: Nathan MacKinnon (42 GP), Sidney Crosby (42 GP), Evgeni Malkin (46 GP) and Alex Ovechkin (52 GP). Point’s goal also marked the first time in the series a team scored in the opening frame.

Three minutes later, the Hurricanes had another penalty. Andrei Svechnikov was sent off for hooking Point and the Lightning got their second opportunity with the man advantage. They got a couple of shots but again came out empty. 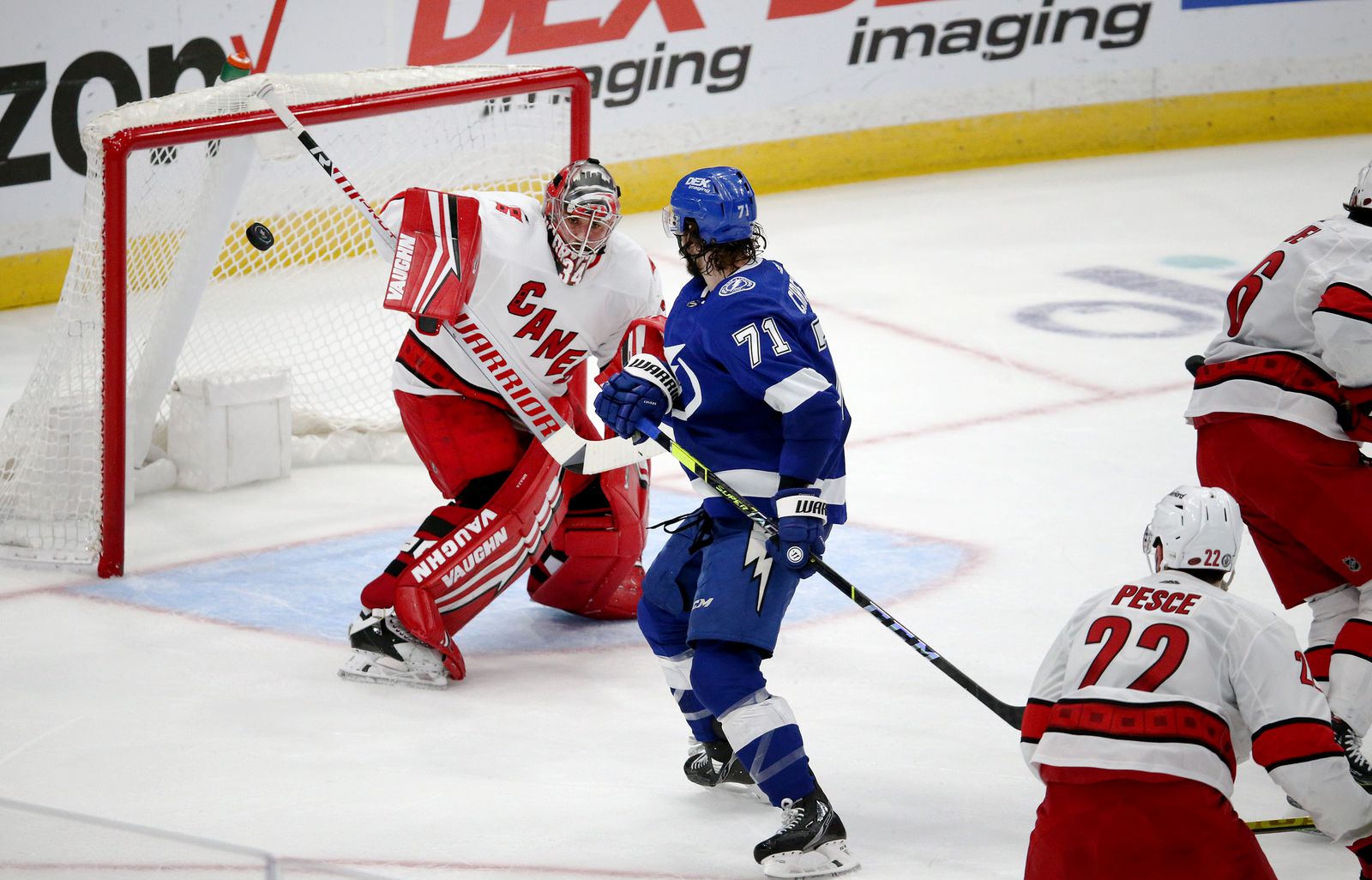 Holding a slim lead after one period, the Lightning started the second period fast. Point had an amazing chance in front of Mrazek but was tripped by Svechnikov before the puck left his stick. The ensuing power play was awful and the Hurricanes gained momentum as a result. 31 seconds after Svechnikov was released from the box, Teuvo Teravainen scored to even things at one apiece. It was Teravainen’s 12th playoff goal in a Hurricanes uniform, tying Justin Williams and Ray Whitney for sixth-most in franchise history.

From there, the Hurricanes took control. 39 seconds after Teravainen’s goal, Jesper Fast beat Andrei Vasilevskiy to give Carolina a 2-1 lead.

Not long after that, a tripping penalty sent David Savard to the penalty box. The Lightning penalty kill came up huge, keeping the Hurricanes from scoring. They used that as a springboard to tie the game on a power play shortly thereafter, as Jordan Martinook was penalized for boarding Jan Rutta. A crazy play saw Alex Killorn hit the crossbar and the puck bounced out to Steven Stamkos. The captain didn’t miss, tying the score at two.

Unfortunately, the Hurricanes wrestled back control. A goal by Dougie Hamilton 41 seconds after Stamkos tied things gave Carolina a 3-2 lead. They kept up the pressure, with numerous shots on Vasilevskiy. That paid off, as Jaccob Slavin fired a shot from the boards that snuck past the Bolts goaltender to make it 4-2.

The Lightning weren’t going to go quietly though. They got some help too, as the Hurricanes were playing undisciplined hockey. A holding penalty by Jake Bean gave the Bolts a power play. Kucherov wasted little time, scoring to cut Carolina’s lead to one.

Gaining confidence, Tampa Bay went back to playing the aggressive style that helped them take an early lead. It paid off, with rookie Ross Colton making a beautiful pass to Tyler Johnson who beat Mrazek to tie the game at 4-4.

With the period winding to a close, Svechnikov took his third penalty of the game when he roughed up Yanni Gourde behind Mrazek. Now hot, the Lightning power play went back to work. Kucherov faked a shot before passing to Stamkos who fired the puck past Mrazek to give Tampa Bay a 5-4 lead.

Steven Stamkos on the crazy second period: “probably the craziest playoff period you’re going to see the rest of the way.”

Like Stamkos, Head Coach Jon Cooper also thought it was a crazy period. “That was chaotic — it was a damn circus out there,” the Lightning coach said. “But, definitely no refunds after that one. Take your coach’s hat off, it was one hell of an entertaining second period.”

It was the first time in 11 years an NHL playoff game has seen anything like it; 8 goals in one period. 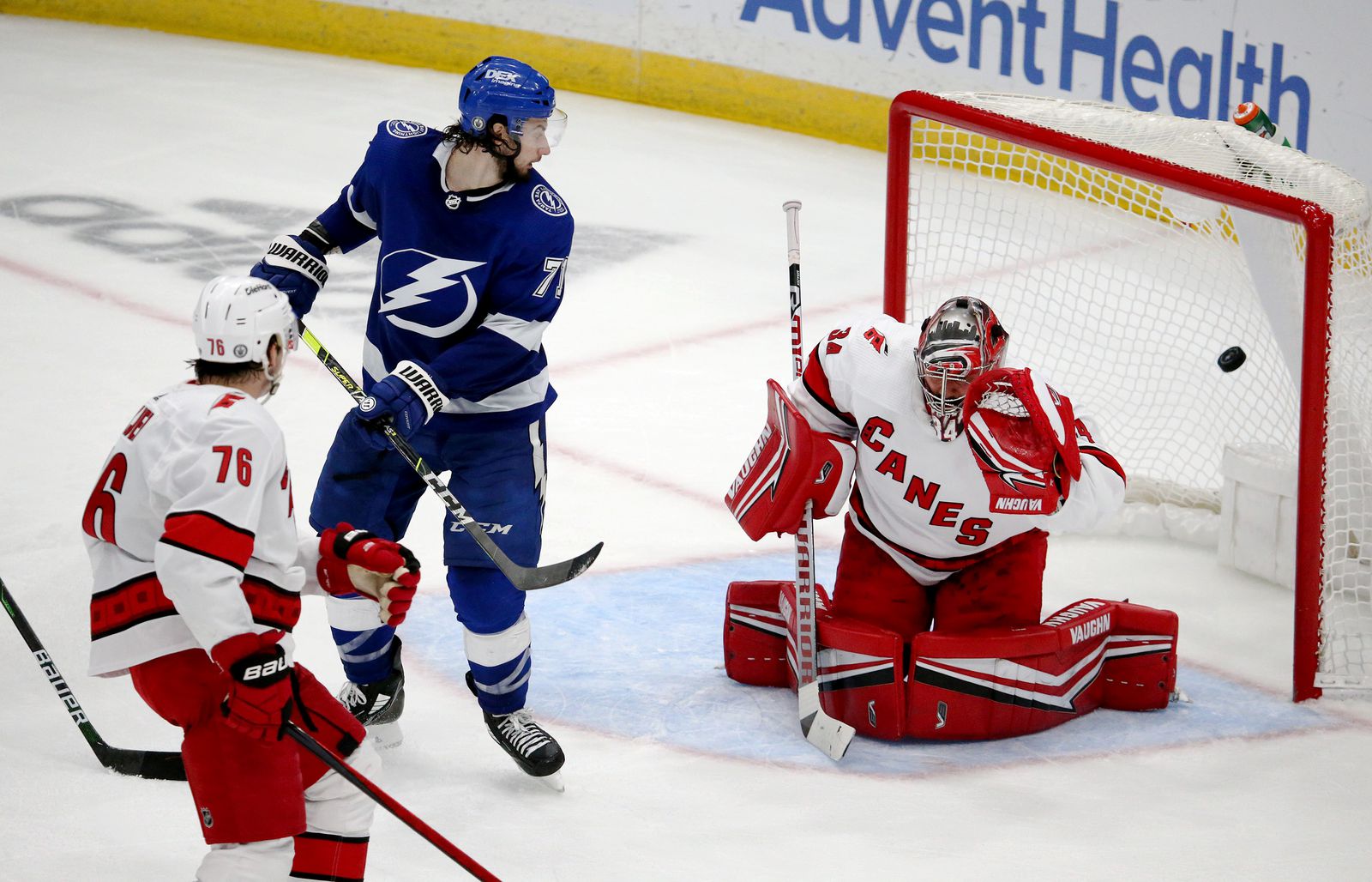 Entering the final frame, the Lightning needed to clamp down defensively and not take any needless penalties. However, an interfering penalty on Savard took place within the first few minutes. The penalty kill stood strong, though, making sure the Hurricanes didn’t get any more momentum.

A couple of minutes after Savard exited the box, the Bolts found themselves with an odd man rush. Palat made a nice pass to Kucherov who beat Mrazek from far out while off balance. That made it 6-4.

The Hurricanes got chances, especially late in the game, but Tampa Bay shut them down. Up 3-1 in the series, the Lightning look to take care of business by eliminating the Hurricanes in Game 5. Puck drop is at 6:30 PM EST on Tuesday, June 8. Rookie Alex Nedeljkovic will likely start Game 5 in Raleigh Tuesday.