Defense wins championships. That’s what the Tampa Bay Lightning have been preaching in recent weeks, as sloppy defense had led to a mini slide down the standings. A commitment to playing solid defense was the key in Thursday night’s 3-1 win over the Columbus Blue Jackets.

This game started well for the Lightning. They set the tone with some nice hits, leading to a few scoring chances. Blue Jackets netminder Elvis Merzlikins was up to the challenge though, making good saves and not allowing many rebounds. That fired his team up, with Jack Roslovic clocking Blake Coleman.

From there, it was on. Luke Schenn delivered a massive hit on Max Domi as he skated through center ice. That lit a fire under the Bolts, who worked hard to set up a beautiful chance for Brayden Point. Merzlikins was quick to get over and deny the opportunity though.

Not long afterward, Ondrej Palat was called for cross checking, giving the Blue Jackets a power play. Even in a slump, they managed to break through. Seth Jones’ shot from the point looked to be deflected by Roslovic before beating goaltender Curtis McElhinney. That made it 1-0 Blue Jackets.

After that, Columbus took control, pressuring the Lightning into mistakes. A turnover in the neutral zone gave Roslovic a breakaway, but McElhinney made the save. Other miscues were turned away by the embattled backup goaltender too, as he looked to bounce back from a 7-2 loss in his last game action.

The middle frame began with the Lightning hounding the puck. Early on, sustained pressure led to Columbus rookie defenseman Josh Dunne losing his stick. Realizing the situation, Erik Cernak made a nifty move to try and get by him for an opportunity. That forced Dunne into a tricky situation and he was sent to the box for holding.

On the ensuing power play, the Bolts weren’t able to get set up and ended up on the defensive end. The result was an easy penalty kill for the Blue Jackets. That should have given them momentum, but a punch by rookie Cole Sherwood on Anthony Cirelli sent Columbus back to the kill. This time around, the Lightning generated a few chances but were still unable to beat Merzlikins.

Right after their second failed power play, they finally got one past the Blue Jackets goaltender. Yanni Gourde forced a turnover in the neutral zone and skated the puck into the offensive zone. He then passed the puck cross ice to Coleman who fired a shot on net that eluded Merzlikins to tie the game at one apiece. 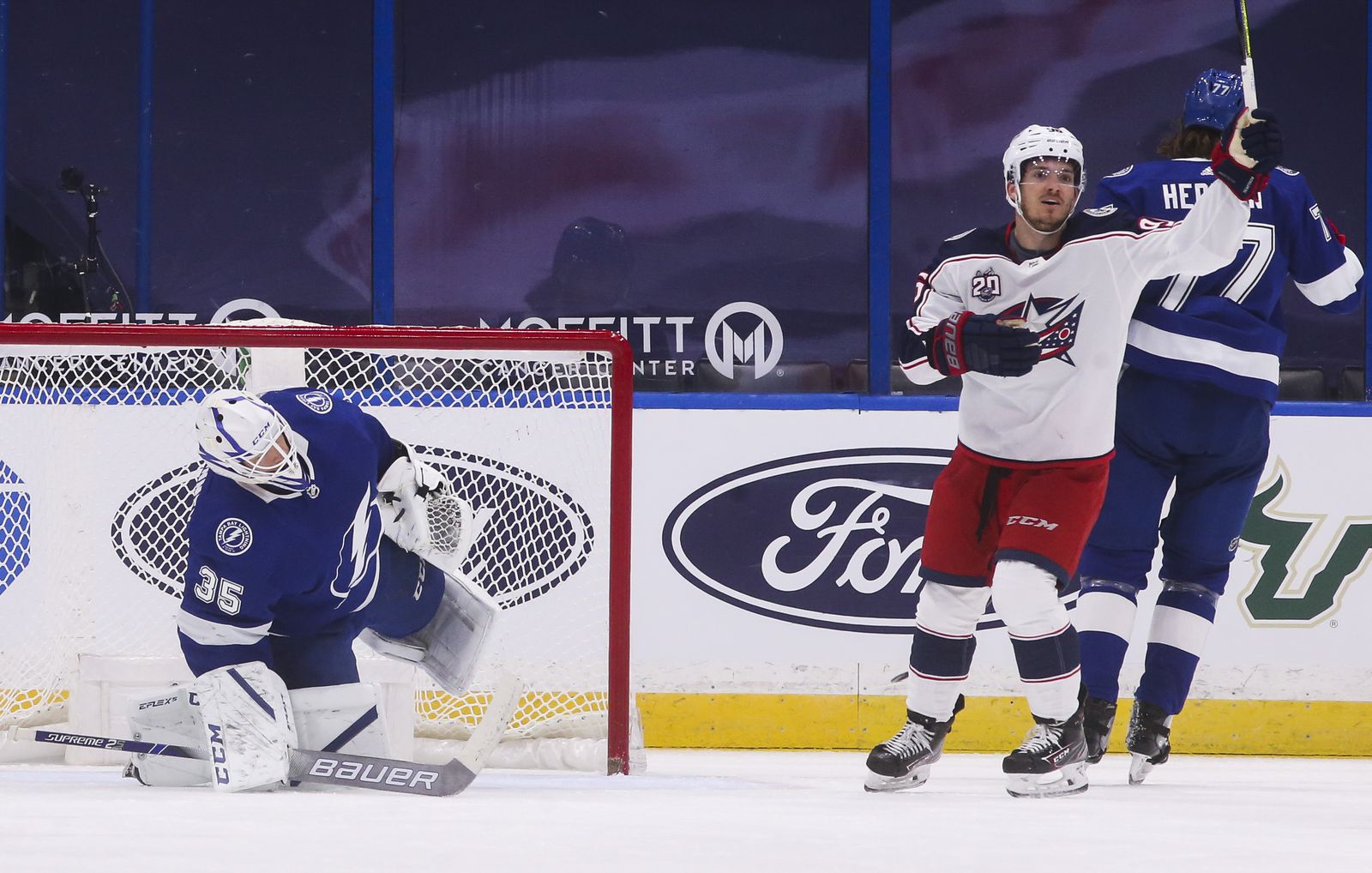 Heading into the final period, the Lightning had to make sure they didn’t allow any odd man rushes or breakaways. If they could maintain a solid defensive structure, the goals would eventually come.

The team came out flying, with the fourth line leading the charge. A shot from the point saw Ross Colton barrel into Merzlikins in an attempt to break the tie. No penalty was called, likely because it wasn’t deemed to be intentional.

Coach Jon Cooper also made a minor switch to the line combinations entering the third, moving Palat down to play with Alex Killorn and Tyler Johnson and Cirelli up with Point and Alex Barre-Boulet. It took a little time, but that adjustment paid off.

With Columbus in a line change, Cernak found room on the right side and fired a shot on net. The rebound popped out to Killorn who quickly passed back to a wide open Palat. He fired a quick shot from the slot that beat Merzlikins to break the tie, making it 2-1.

At that point, the Bolts took control of things. They had a flurry around Merzlikins to try and get that third goal, but he stood tall and gave his team a chance. During that period, Dunne was penalized for hooking, giving the Lightning their third crack with the man advantage. However, Tampa Bay still couldn’t cash in.

That didn’t seem to matter, as Tampa Bay continued to play with the puck more often than not. The Blue Jackets tried to push late, with Merzlikins pulled for the extra attacker, but they couldn’t get their shots through a maze of blue jerseys. Patrik Laine whiffed on a shot with 25 seconds remaining, and Coleman got to it and sent it into the empty net to make it 3-1. 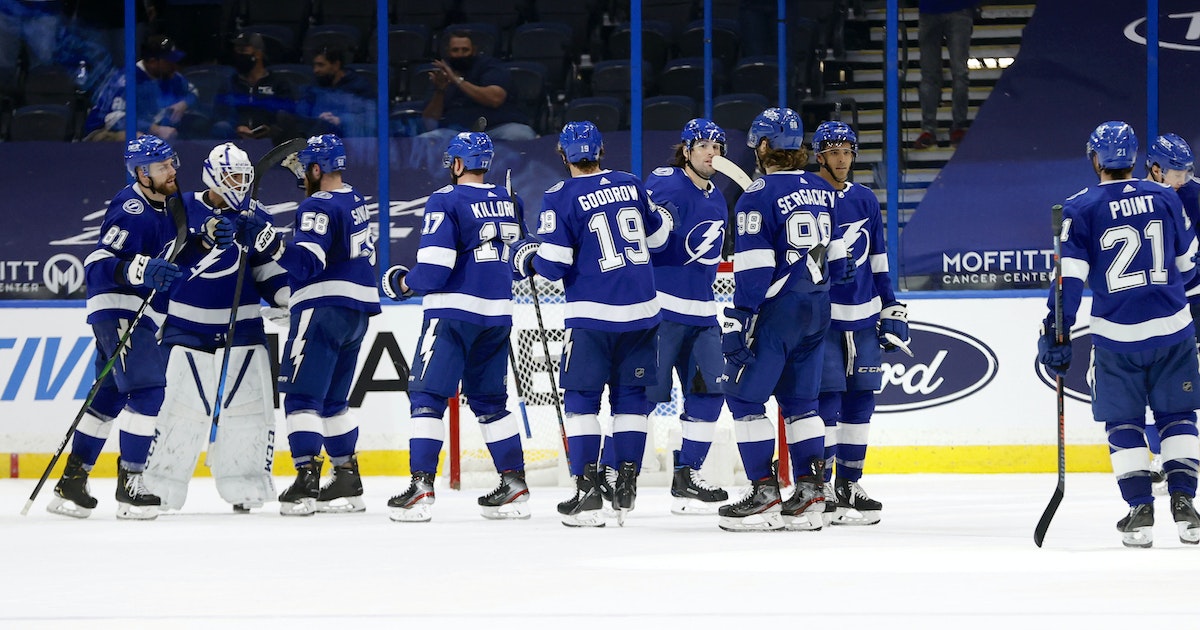 After playing five games in seven nights, the Lightning get a few days to rest and recharge before finishing the season with nine games in 16 days. That stretch begins when they host these same Blue Jackets in the nationally televised series finale Sunday night, April 25. Puck drop is scheduled for 7:00 PM EST.